Hello. Happy Sunday to you. A very quick blog for you today because I am suffering from the Bombay torment this morning. This is a self-inflicted ailment which comes from too much gin so I’m not seeking sympathy, but it has left me with overly sensitive fingertips so typing becomes a chore.

The weather here was lovely yesterday, so I watched the FA Cup final in the garden with a beer while barbecuing a chicken. I presume that somewhere there are anti-glare tablets/iPads which you can use anywhere, but when the sun is shining you have to improvise a little. You can see very clearly that German Shepherds have very little interest in Association Football – certainly not when Die Mannschaft are not involved. 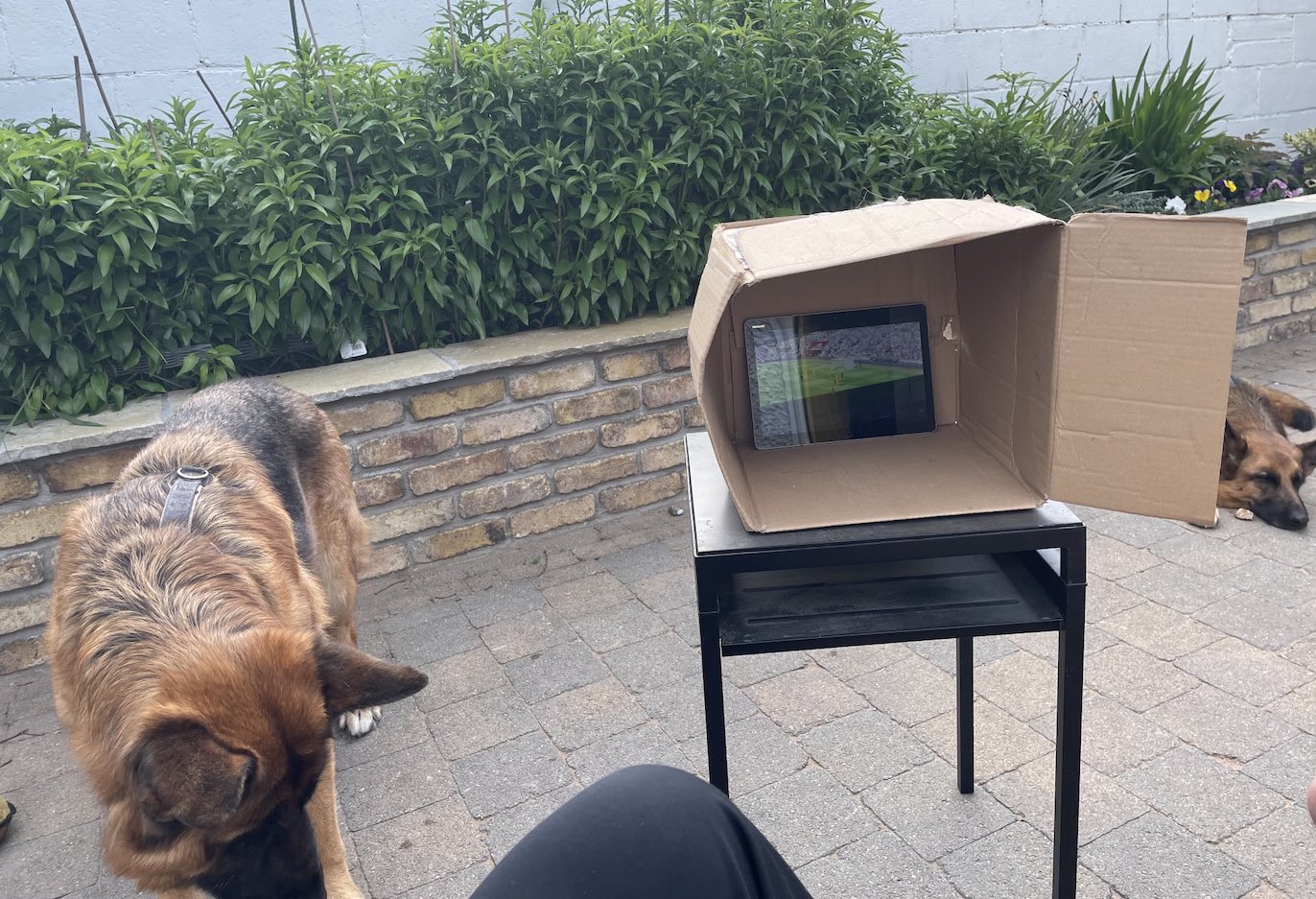 I’ll be perfectly frank with you this morning, I’m glad Liverpool won. It was quite fun watching an exciting game without huge emotional investment – while at the same time trying to reassure my brother, the Mugsmasher, who was up to 90 as they say. He wasn’t confident when the 120 minutes were up and the game went to penalties.

It’s funny how quickly a shoot-out can change. It was advantage Liverpool after Azpilicueta missed and then, after Sadio Mane had missed a chance to win the cup, they had to keep scoring to stay in it. It flipped again when Mason Mount fluffed his lines, then the back-up left back scored the winning penalty and that was that. Celebrations on Merseyside, heartache in west London and the Kremlin.

You have to laugh. If you are in any way a decent person, with even a sliver of humanity inside you, this is the kind of stuff that feeds your soul and makes you believe that there is still some good in the world. There is so much awful stuff out there that we have to enjoy it when things like this happen.

But look, let’s be completely honest, this wasn’t really about Liverpool winning, it was much more about Chelsea losing. That’s three FA Cup finals in a row now. 2020 we beat them to lift the famous old trophy for a record 14th time. Last season a Youri Tielemans goal was enough to give Leicester victory, and now this. Can they make it four in a row next season when, by some miracle, non-league Letchworth FC United Town Rovers make it to the final, and win 1-0 thanks to a wonder strike from 38 year old central midfielder Anto (he’s been at the club so long nobody knows his full name anymore, he’s just Anto)?

It is his last game for the club, because there’s only so much a man of his age can do, and when you’re 5’7 and shaped like an increasingly large barrel you know it’s time to hang up your boots. Those ‘robust’ challenges he puts in, the ones that only players of his stature can make, and get away with for some reason, are becoming increasingly mistimed, and he’s beginning to feel some slight guilt at the injuries he has inflicted upon the opposition this season – even if, as they lie screaming on the pitch, blood pouring from an open wound on their shin and through their cracked shinpad, he waves a dismissive arm at them and says ‘Ah get up you big fanny’.

If the weather allows it, I will watch that in the garden on my shiny new glare-free iPad and laugh my head off.

Beyond that, there’s not much to talk about this morning that can’t wait until tomorrow when we’ll look ahead to the Newcastle game on Monday night. For now, have yourselves a great Sunday, and if you’re looking for something to listen to, we’ll have a preview podcast for you on Patreon around midday or thereabouts.